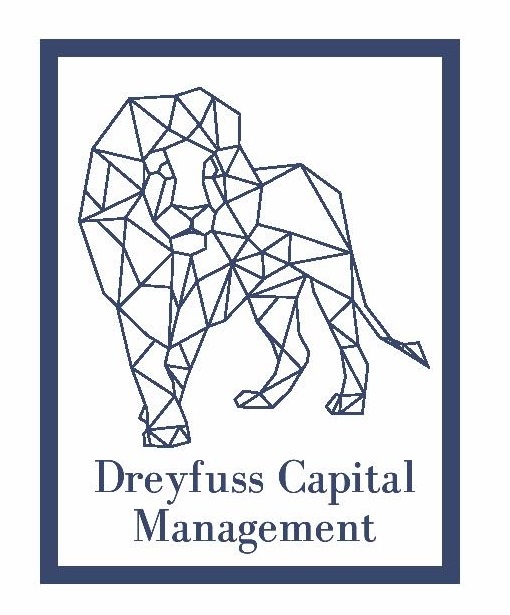 "At the same time that interest rates curb spending, they also have a negative effect on the stock market, primarily for two reasons:

1. Margin Investing - Investors, including retail investors and hedge funds, are able to borrow money against their investments to buy more investments. When interest rates are low and market is going up, this is a no-brainer for investors willing to take on risk and they often borrow money to buy stock.

Since interest rates are expected to go up to fight inflation, market sentiment will be that investors who bought stock with borrowed money will be forced to sell off their investments. These investors focused their investments in high-flying tech stocks that were popular last year.

2. Corporate Debt - Approximately 20% of the companies that comprise the S&P 500 are considered zombie companies. This means that when you strip the ability of the company to borrow money in order to finance business operations, the revenue from existing sales is insufficient to cover their existing debt payments. In layman's terms, the company is insolvent."

Pondering the growth stock sell-off from March to present, it is hard to quite comprehend the exact source of the magnitude of the pullback from a conceptual standpoint. Did the Covid vaccine really eliminate the secular trend of technology and innovation?

Considering that the last time an inflationary environment that lead to interest rate hikes happened in 2015 -2017, looking for explanation isn't any easier. In 2015-2017, the Federal Reserve hiked the interest rate four times by 0.25%. Yet in 2021, there hasn't been a single cut, and valuations have fallen in several areas of tech by 40-60%. Financials stocks, which are favorable to own when interest rates rise, have sky-rocketed while the Federal Reserve has repeatedly said they won't be hiking rates anytime soon.

An algorithm is a formula to accomplish a task that dictates a course of action based on a few or many variables. In practice, one could design an algorithm to do simple multiplication or something as complex as buying and selling stock based on various inputs. A large portion of the daily volume of stock trading in the markets are based on these algorithms that analyze the behaviors of different variables, such as economic data like price inflation, commodity prices, unemployment figures, interest rates on overnight loans etc.

time. Let's focus on a stock like Apple for example: 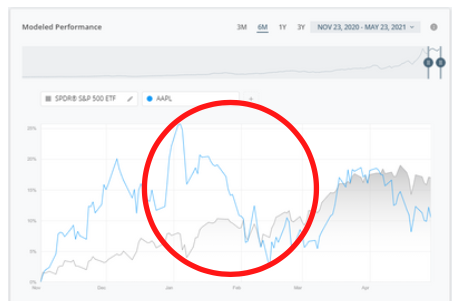 Note that during January no bad news in particular came out about Apple. Yet Apple stock sold off roughly 20%. What caused this sell-off? Many can speculate, but this was just around the time that inflation news started baking into the market. Apple relies on semi-conductor chips to produce IPhones. If semis all of a sudden cost more and Apple doesn't raise its prices, then Apple's margins fall. But did most holders of Apple stock realize this and begin selling? Likely not. The reason being is that most Apple stock is held in S&P 500 funds, and most S&P 500 funds are held in 401k and retirement accounts that aren't traded frequently. Were holders of S&P 500 funds astute enough to realize that Apple is 6% of the index and that semi-conductor prices going up was going to affect Apple's margins? I think most would agree that isn't the most reasonable explanation. So that begs the question, who was selling Apple stock at such a volume to cause a 20% decline with no direct bad news on the company?

Droughts in Taiwan Mix with Winter in Texas 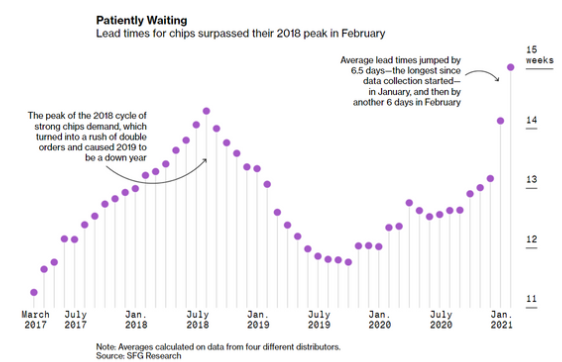 Before we go further into our investigation, let's take a look at the cause of the chip shortage. Since semiconductors are manufactured and aren't raw materials, they have supply lead times, or the amount of time in between the buyer's order and receipt of the chip. As lead times expand past 60 days, consumers of chips begin to worry that they won't be able to get their chips before they need to order new ones. This causes those businesses to order double what they need in anticipation of what future demand will be. This allows sellers of chips to have inventory to sell should demand go up further. The peril of this approach is what happens if the demand is not as strong as anticipated causing a surplus. In 2018, there was a rapid cycle of double ordering that lead to an inventory surplus in 2019. This caused manufacturers like Applied Materials, Qualcomm & TSMC to ramp down on manufacturing new chips. The trend began to reverse in January of 2020 as inventories plummeted just before the Covid pandemic began. Covid destroyed the supply chain that supplied the world with microchips, particularly as one of the world's biggest suppliers TSMC is based in Taiwan. In summer to fall of 2020, when consumption was still rather low due to shutdowns, the damage was contained.

As the economy began to open back up in late 2020/early 2021, demand picked up as stimulus flooded consumers bent on getting the new iPhone or new car. At the same time that Taiwan hadn't fully opened up, chip factories in Texas got hit by a particularly brutal winter storm in February. Lead times spiked from 15 weeks in February to 17 weeks in April. 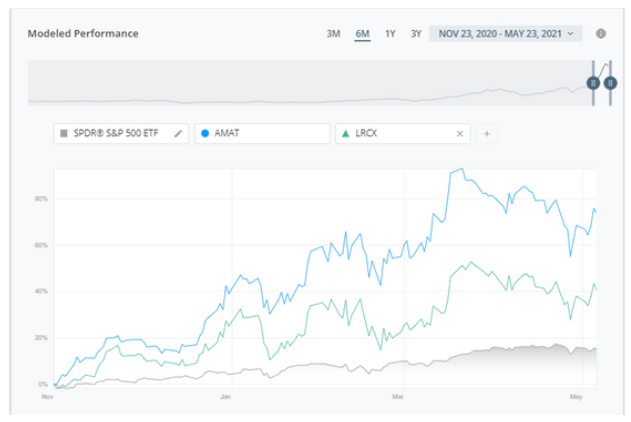 Knowing the cycles of the semiconductor market, one would find it simple conceptually to design an algorithm sensitive to the lead times in the chip market to determine whether to buy chip manufacturers which benefit from shortages and sell smartphone makers which suffer from shortages like Apple. As lead times went down, these algorithms could be designed to buy smartphone makers and sell chip manufacturers.

Too Many Cooks in the Kitchen

Going back to our original question, the key here is that these algorithms aren't long term holders of Apple stock. When the hedge funds and investment banks sell Apple, they are borrowing money from commercial banks to sell Apple and buy for instance Applied Materials. This allows the algorithms, if correct, to profit enormously from very small amounts of stock actually owned and held long term. For example:

Fred owns 100 shares of Apple at $125 per share. Lead times in semis go up, and XYZ Hedge Fund borrows $25,000 from ABC Bank to buy 100 shares of Applied Materials (and hold) and Apple (and immediately sell). If AMAT goes up $5 per share and Apple down $5 per share, Fred loses $500. At the same time, XYZ Hedge Fund makes $500 on AMAT and $500 on Apple. This is the amplification of returns that occurs because of leverage. Every time Fred owns a stock bought from cash and it goes up 1%, if XYZ Fund owns the same stock borrowed at 2x leverage, XYZ makes roughly 2%.

The Weak Hands Get Shaken Out

The issue with borrowing money to buy stock or sell stock is that you do so paying interest. Since you are paying interest, you are vulnerable to short terms swings in the market AND interest rates. For instance, if you buy stock on margin and the stock price goes down, you are tempted to sell the stock faster because you are paying interest on it. When you sell a lot of stock you paid for with borrowed cash, this causes other people who did the same to sell theirs too. The reason for the selling is not because there is something particularly wrong with for instance Apple, but rather crowd mentality. Without getting too far into the weeds, this is precisely what happened recently with the Archegos Fund. Archegos borrowed or leveraged their fund by 600% which produced astronomical returns when things were going right. When the market turned on their positions, the banks forced them to sell off their borrowed stock in a fire sale reducing the value of their fund to almost zero.

So too in 2021, a lot of people have borrowed money to buy "value" stocks like Marriott Hotels, AMC Theaters, Chevron and Exxon Mobil. I exemplify these stocks because all four of them are zombie stocks. This means they don't have enough revenue to pay off their debt payments annually without issuing debt or new shares of stock. This trade is reliant on one factor: inflation. So is inflation continuing? It is still early to tell, but let's take a look at a side-by-side comparison:

There is a correlation here though. While we don't have up-to-date lead time data for semis in May yet, let's take a look at the tech sector since May 13th:

While it's too early to say for sure, small cap to large cap tech has had a very strong performance over the past week, directly tied to inflationary data.

This is very similar to what happened with tech in 2015/2016 leading up to the first interest rate hikes after the Great Recession. Let's take a look: 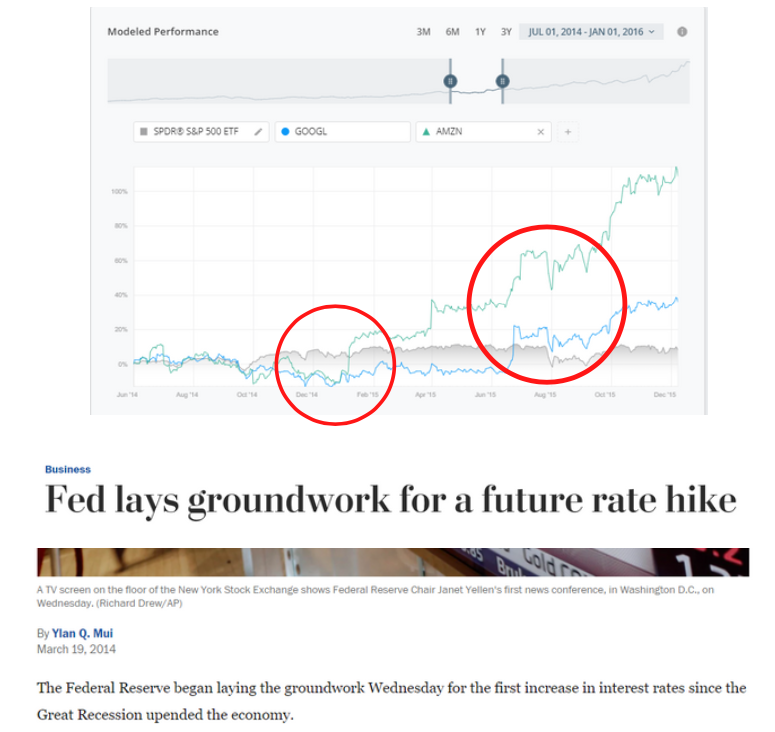 The reality is that we haven't had tremendous inflation since the 1970s and 80s when we were still a petrol based economy and net importer of oil. Technology and the advent of the computer and internet have changed the way business is done and made life much cheaper. Whether the process of inflation or deflation is presently in upswing, the long term trend of life getting easier with technology remains intact. My hope is to stay on the right side of innovation and change.

Going into Memorial Day weekend, I hope everyone has a wonderful vacation. Vacations have a way of bringing us back to our center of gravity and look at things in a fresh light. I look forward to continue serving as your trusted advisor and helping you navigate these tumultuous times.

Thank you very much,

Are we Right for Each Other?

We value our relationships with our clients. We want to focus our attention and resources on you
without compromising the quality of our services. So, we are selective when we establish new client relationships. We find that our clients generally share these characteristics:

They understand the value of working with a financial advisor – someone with whom they can
develop a dynamic relationship to build and preserve wealth.